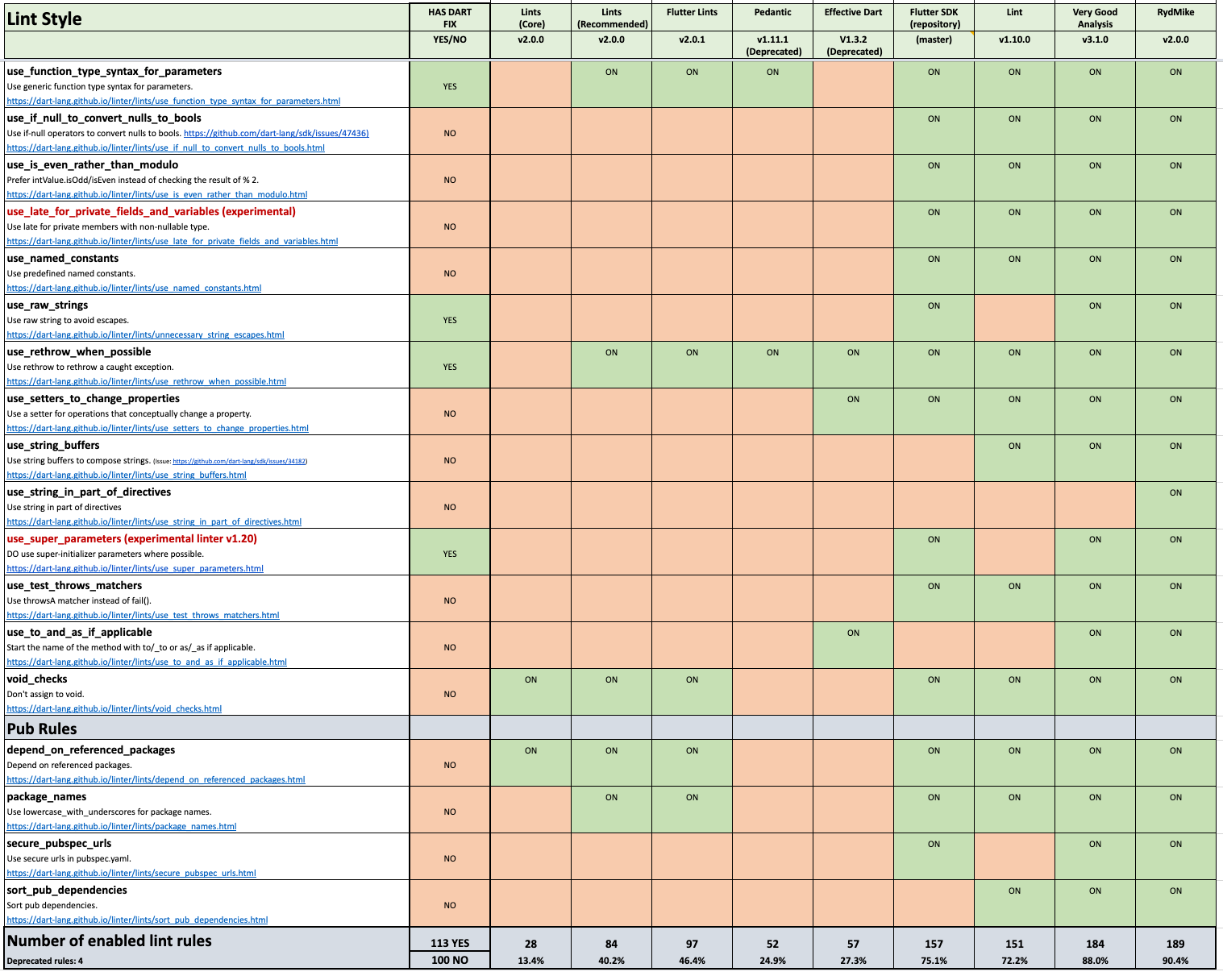 What Is the Dart Linter?

The Dart linter is a static analyzer for identifying possible problems in your Dart source code. There are close to two hundred linter rules are available, checking anything from potential typing issues, coding style and formatting.

You can set up the Dart analyzer and linter to do your bidding the way you like it. Some rules are more important than others, and some are just style and personal preference related, the kind that developers like to debate forever. When it comes to them, there is no real right or wrong, do what you prefer if a certain style is not mandated in your project.

Enabling very strict linting rules on a code base that previously did not use it, can also be very time-consuming. For such cases, gradually introducing more stringent lint rules is a good idea. To do that, you may want to get to know the lint rules better and how to set them up yourself, without using a package.

To study and read more about each lint rule, you can head over to the Linter for Dart site.

How Do I Use the Dart Linter?

Both the analysis_options.yaml and the all_lint_rules.yaml can be placed in the root of your Flutter project folder, same place where you have your pubspec.yaml file.

In my analysis_options.yaml I include the all_lint_rules.yaml file. I exclude commonly generated Dart files from being analyzed, and enable analyzer strong-mode. In strong mode, I like to disable implicit type casts and implicit dynamic. I cannot recommend doing so enough. It might feel a bit tedious, but it will save you from a bunch of potential gotchas in Dart code.

I lift common mistakes that I think should be errors, to error level. Then the analyzer won’t even let me compile code with these mistakes. I like to flag missing return and missing required parameters as such errors, not as warnings or info. I keep parameter re-assignments as a warning though, there are occasions when it may be needed.

The rest of the settings is just turning OFF linting rules I do not want to use. Since all rules are now ON by default, it is a list of rules that should NOT be used. I try to keep it relatively short.

As for what actually gets turned OFF, first there are some linting rules that conflict with each other. When it comes to them, you can go two ways. If you don’t want to make a choice and want to be able to use both alternatives, then disable both rules. Alternatively choose one of them and disable the one you do not want to use. I prefer to make a choice, the conflicting rules are often highly opinionated, in certain scenarios, it might be more lenient to allow both options, but if it is a personal project, then go ahead and use what you prefer.

A typical example of a personal preference linting rule, is the prefer_double_quotes versus prefer_single_quotes choice. Even if a linting rule is highly opinionated, in large project you may still want to make choice to enforce a consistent style.

Here is my choice and my rationale on the quote style:

In addition to things that conflict with their own counter-part, what else do I turn off? As little as possible, I prefer things pretty strict, but that is just my personal preference.

I documented the choices I made, and the reasoning behind the choices at the point in time when I made them. I vary it slightly depending on if I am using linting for a package or an app, keeping it even stricter for public packages. These options and selections are also documented.

Here is a Gist with the full details of the settings I use in analysis_options.yaml for my personal projects.

I might change a few settings as things evolve. One rule I found myself disliking recently and disabling, is the sort_constructors_first. Sounds like it is a fine rule, right? For the default constructor I agree, I want it first too. However, after that I want to see all the properties of the default constructor, with their documentation comments. I find this useful for more complex packages that may have constructors with a lot of named parameters.

If the sort_constructors_first rule is enabled, I am forced to use an order where I have to scroll far down to find the properties much further below, after all the named constructors and factories. I find this very inconvenient. This is another minor example of personal style preference. There are many lint rules that are style and code consistency related. Get to know them and find your own personal preferences.

When you disable a lint rule, try to write a short note to your future self why you disabled it. This is what I wrote down concerning why I turned off the sort_constructors_first rule.

The good thing is you can certainly change your mind about a rule’s usefulness or add more as you need, well at least in your personal projects.

The above is also an example of the documentation style I use for all lint rules that I turned OFF. Yes it is verbose, but now I can find my past reasoning for the choice I made. I can also find references to what others have chosen as their lint preference for each rule that I do not use.

What About Using a Third Party Linting Package?

There are many 3rd party packages that define linting rules for you. Previously most notably Effective Dart, Pedantic and Lint as well as Very Good Analysis are popular packages that comes with their recommended rules.

There is nothing wrong with using any of these packages if they fit your needs. Using a ready-made linting package may very well be the right choice for you. If you are not interested in getting to know the rules yourself and follow-up on new rules that are added by the Dart team occasionally, then please do use a package. I have a personal recommendation regarding which one as well.

For my personal projects I just prefer the clarity of enabling all rules in one file, and then disabling the ones that do not fit my use case and preferences.

Earlier I started with one of the above packages too, but I noticed that when I needed or wanted to modify a few rules. I then ended up with enabling or disabling rules in relation to used package settings. This got a bit messy to keep track of. Eventually it felt cleaner to just turn everything ON, and then just have OFF definitions in my analysis_options.yaml. Super simple, clear and easy to modify when needed, without messing things up. Plus no need for a package for this relatively simple setup.

Which Lint Package Should I Use?

If I want to use a package, which lint package should I use? Answering this question got a lot easier with Flutter 2.5. First, both the package Effective Dart and Pedantic have been deprecated. For a new project I do not recommend them anymore. Pedantic was from Google mostly for internal use. Despite its name, it was not very strict nor pedantic, more like a minimum set they could agree on internally for Dart projects.

Starting from Flutter 2.5.0 Dart and Flutter teams launched two new lint packages that are used as default when you make a new Flutter package. Let us take a look at them.

The first one is called Lints. It was launched as version 1.0.0 on May 12, 2021. This package contains the new official recommended selection of lint rules for Dart projects.

It comes in two flavors, the absolute minimum lints, called Core lints, and a broader set called Recommended lints. The recommended set also includes the core lints. In the Dart guide you can read more about it here.

The second package is called Flutter lints, It was also launched as version 1.0.0 on May 12, 2021. The Flutter lints package includes the recommended set from Dart lints, plus a few more rules that are important in Flutter projects. These Dart and Flutter lint rule sets are built as supersets, with increasing amount of rules enabled.

Projects created with flutter create using Flutter version 2.3.0-12.0.pre or newer, and thus now also in stable 2.5.0 and later, are automatically enabled to use the Flutter lints package.

You can find the instructions here.

Since this lint rule set is the new default lint package for new Flutter projects, there is no sense in recommending any other linter package than Flutter lints as a general good starting point.

All that being said, as long as Lint or Very Good Analysis have not been deprecated, and you are using them, or just prefer them, they are both very solid choices as well.

They both enable more and even stricter lint rules than the new default flutter_lints. Both lint and very_good_analysis use strong mode and disable implicits casts, and Very Good Analysis also wisely opts to disable implicit dynamic. From version 2.3.0 Very Good Analysis also started treating missing required parameters and missing return, as code errors. I consider this a wise and welcome addition.

The lint package includes excellent reasoning documentation for its lint rule choices in the source, allowing you to read and understand the author’s rationale for the used choices. It also comes with a variant for packages, adding a few more useful rules for public packages.

I also find it interesting to follow what lint rules the Flutter SDK repo uses. Recently there has been many new rules enabled in the Flutter SDK as well. In the previous version (1.4.0) of the comparison table from September 10, 2021, to the current one (1.5.0), the Flutter repo (master channel) has gone from 129 to 146 enabled lint rules.

If you want to stay on top of your linting rule setup yourself, then do as I do. Roll your own linting rule setup. Mostly I do this to use even stricter lint rules than current package linters offer, and to make the opinionated choices I prefer. Most lint packages on purpose avoid making any choice for you when it comes to highly opinionated personal preferences rules.

I also like the clean setup of enabling all rules in one file, that include all currently available rules and turning OFF the ones I don’t use. This keeps the setup easy to maintain. Feel free to do the same or take the easy route and start using Flutter lints now or walk the narrow and strict path with Very Good Analysis or Lint.

If you don’t care about linting and tuning it yourself, the really nice part is that a good basic linting setup is now part of Flutter. Starting from version 2.5.0 you will get an excellent rule set enabled by default for new projects. It is a really cool and a smart move by the Dart and Flutter teams to offer this. It means that eventually all Flutter developers will use more strict lint rules by default, rules that will help improve the quality of produced Flutter apps.

What Are the Rule Differences Between All These Packages?

What are the lint rule differences between all these packages? That is a very good question. I guess I saved the most interesting part for last. I was very curious about this as well, so I went through all the lint settings for the following lint packages and setups:

Here is the full comparison in a Google Sheet, enjoy!

PS. I may have made some mistakes in the review of the settings, if you notice any, please let me know, and I will update it. You can find me on Twitter