On August 31, 2022, at Flutter Vikings in Oslo, I had the pleasure and honor to do a talk and deep dive into theming Flutter apps.

In the evening before the talk, Flutter 3.3 had just been released.

Luckily, all my material had been prepared using the beta release of Flutter 3.3, so I was all set. Well after a few updates late into the night, I was.

My talk was the first one on the conference opening day in the main room. I was going on stage right after Majid Hajian had welcomed everyone to the conference. This was exciting, anticipations were high among the audience and speakers, as this was the first in person major Flutter conference in a long time.

Wait, we have technical problems and at a tech conference, who would have guessed… 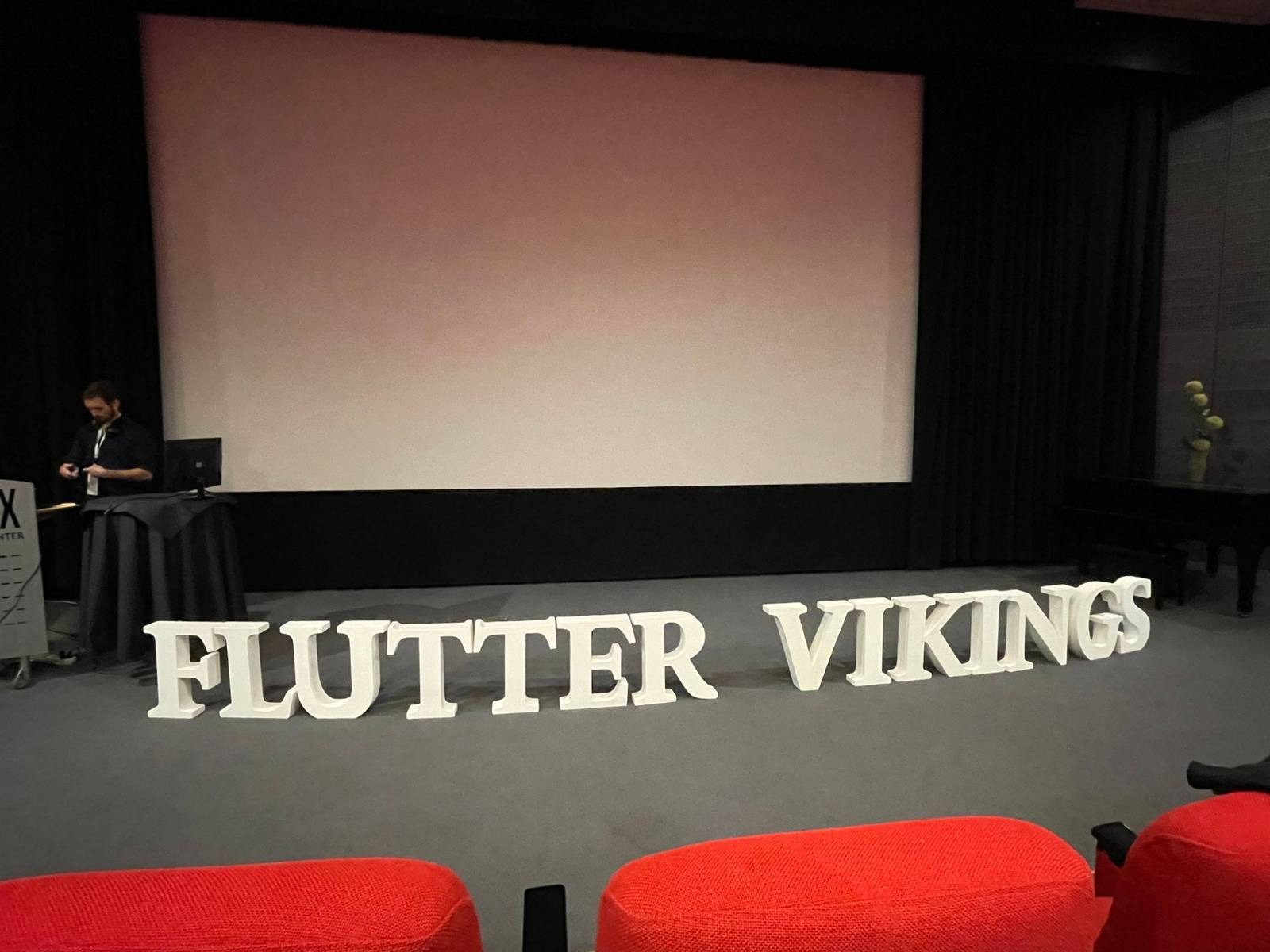 Now we are very late to start the conference. My main concern before was already, will I be able to do it in my 40-minute time slot? We started so late, can I still use 40 minutes? Ok apparently I can, cool.

The tech issues appear to be sorted out, and Majid is opening the conference now. He says something about that everything was working last night, and today a world of problems. I’m barely listening, so excited that this is finally happening. Now he is back on track and welcoming all to the conference. Tim Sneath is on the stage now too. He sounds happy and excited as always, back to Majid, he is thanking all the sponsors. 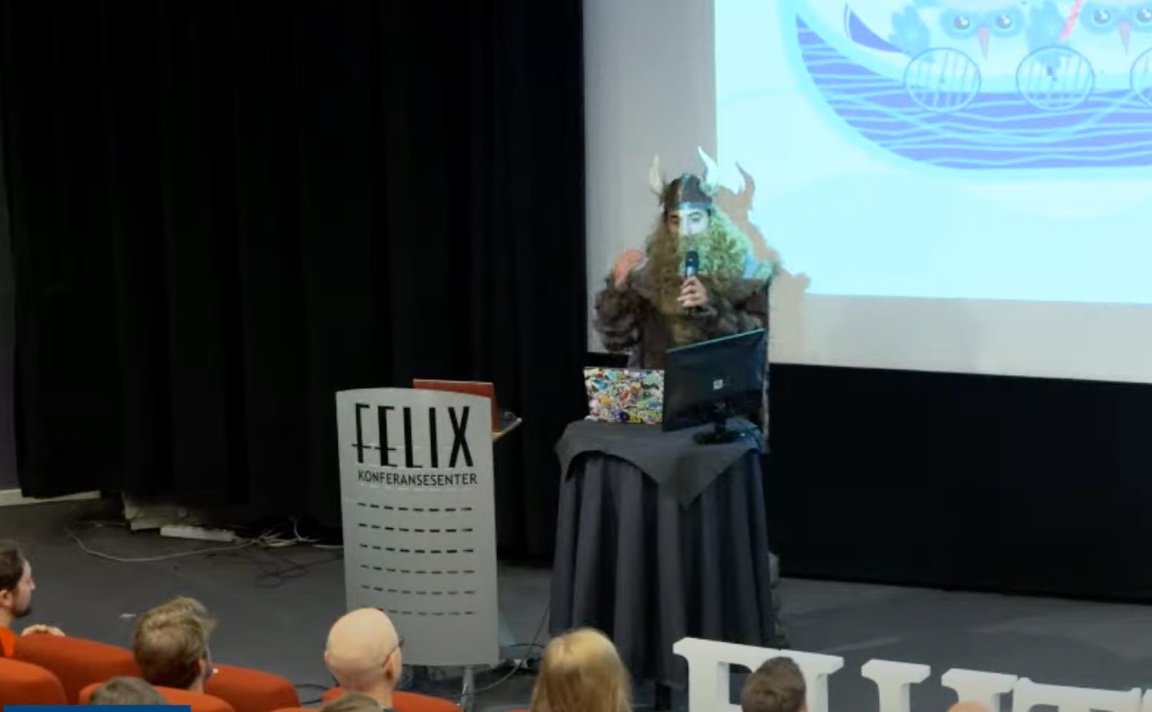 What, he is done already? I’m on now? So what was it I was going to talk about? Diving? Stage dive? 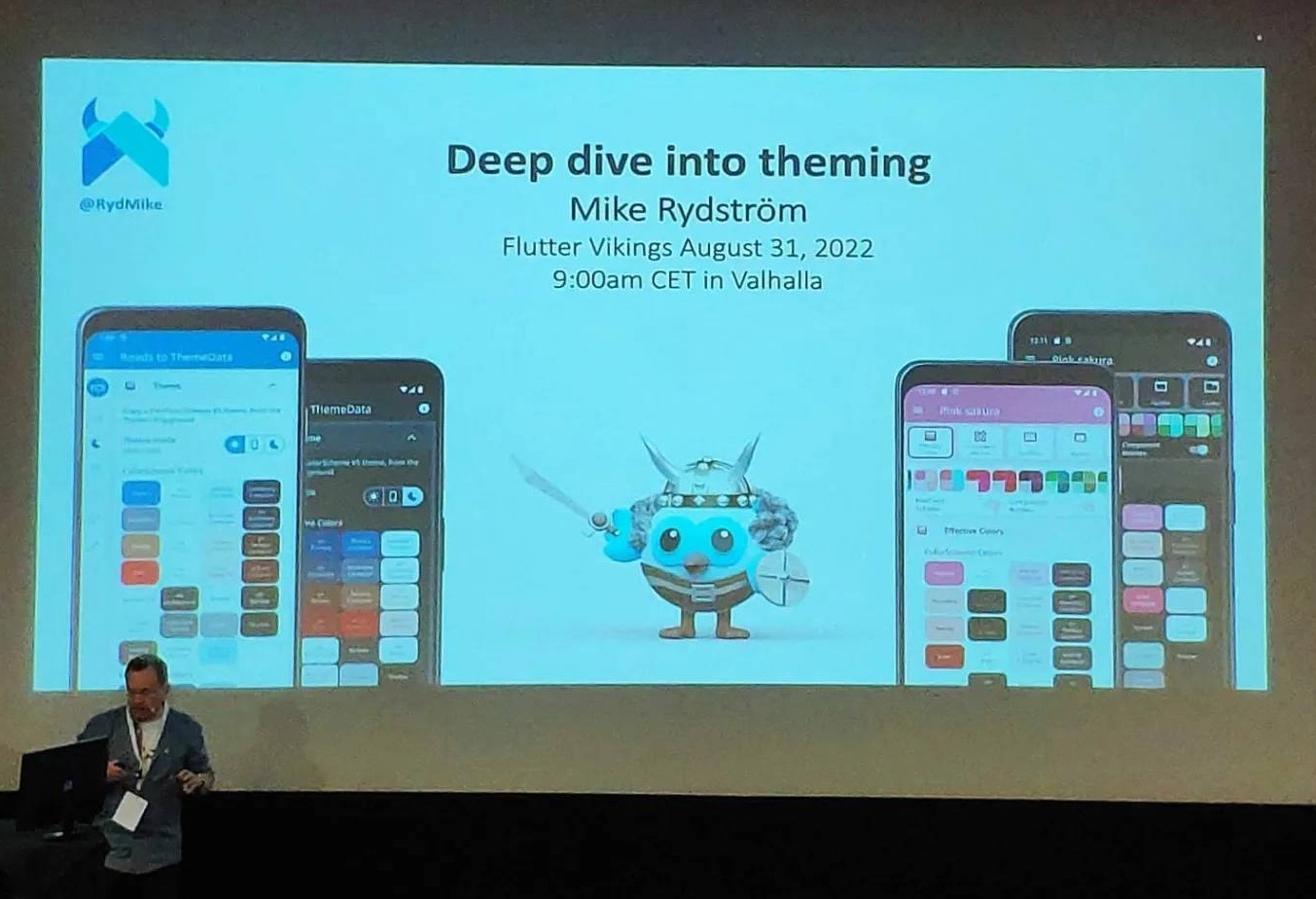 No wait, I got it, deep dive into theming Flutter apps, here we go! In the talk I cover: 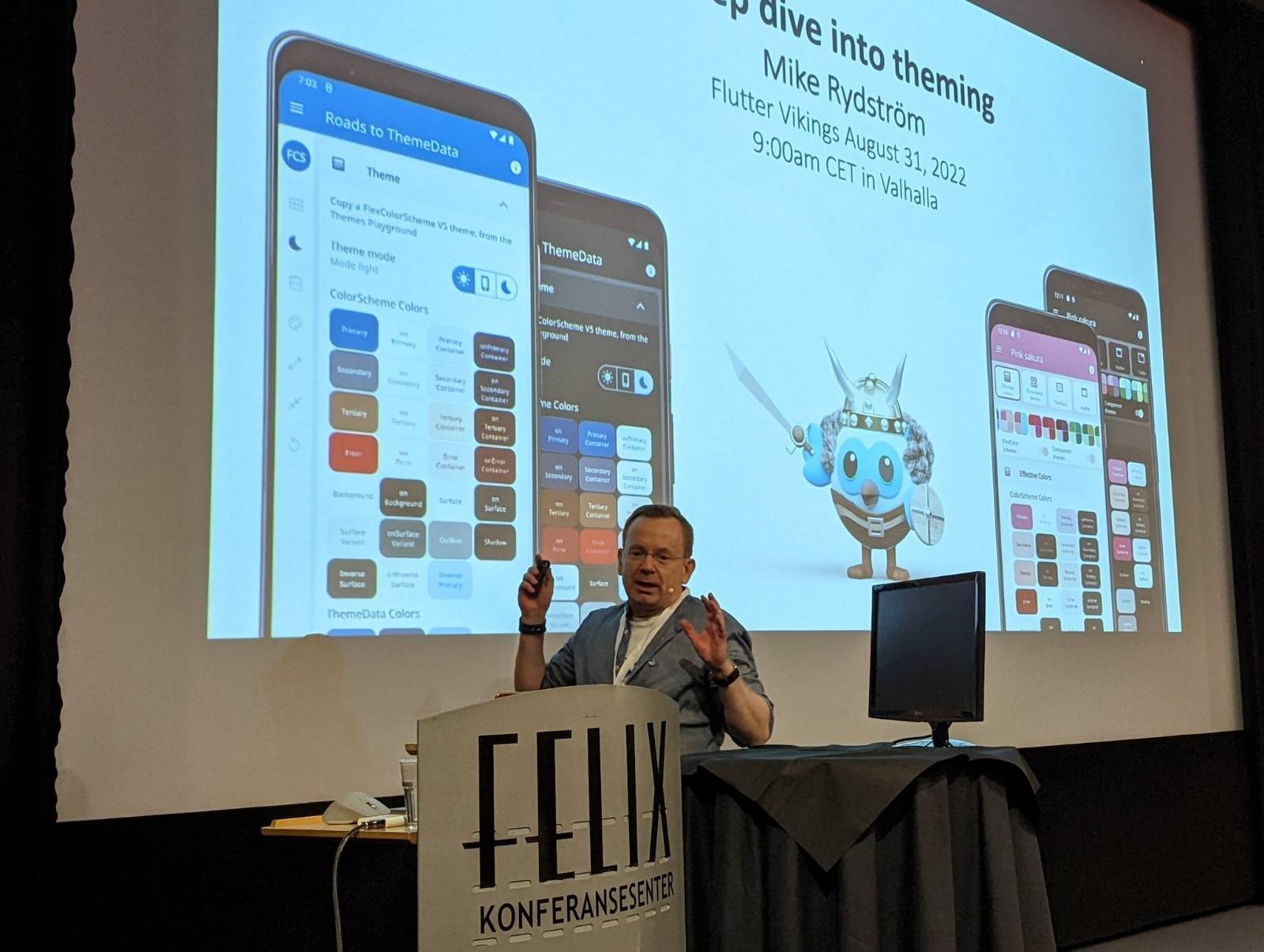 Recordings of the Talk

The talk was streamed live and is available as a stream recording on YouTube. Unfortunately, the opening issues of the Flutter Vikings conference meant we had poor streamed video quality during the opening and the morning talks in the Valhalla room. The quality of the stream was quite bad, so the YouTube recording of the live stream is very fuzzy. There is also no inset of the speaker on the slide deck or even occasionally showing the speaker. Just voice and fuzzy slides from the stream, but you can still find the live stream recording of my talk here.

However, the talk was recorded locally too, including speaker video, slides and audio separately. This video has now been edited and released on November 28, 2022, and is available below.

The video is 40 minutes long, and the inset video of me talking and walking around appears at about around 4:30.

I made my presentation slide deck available, just click on the image below to view it: 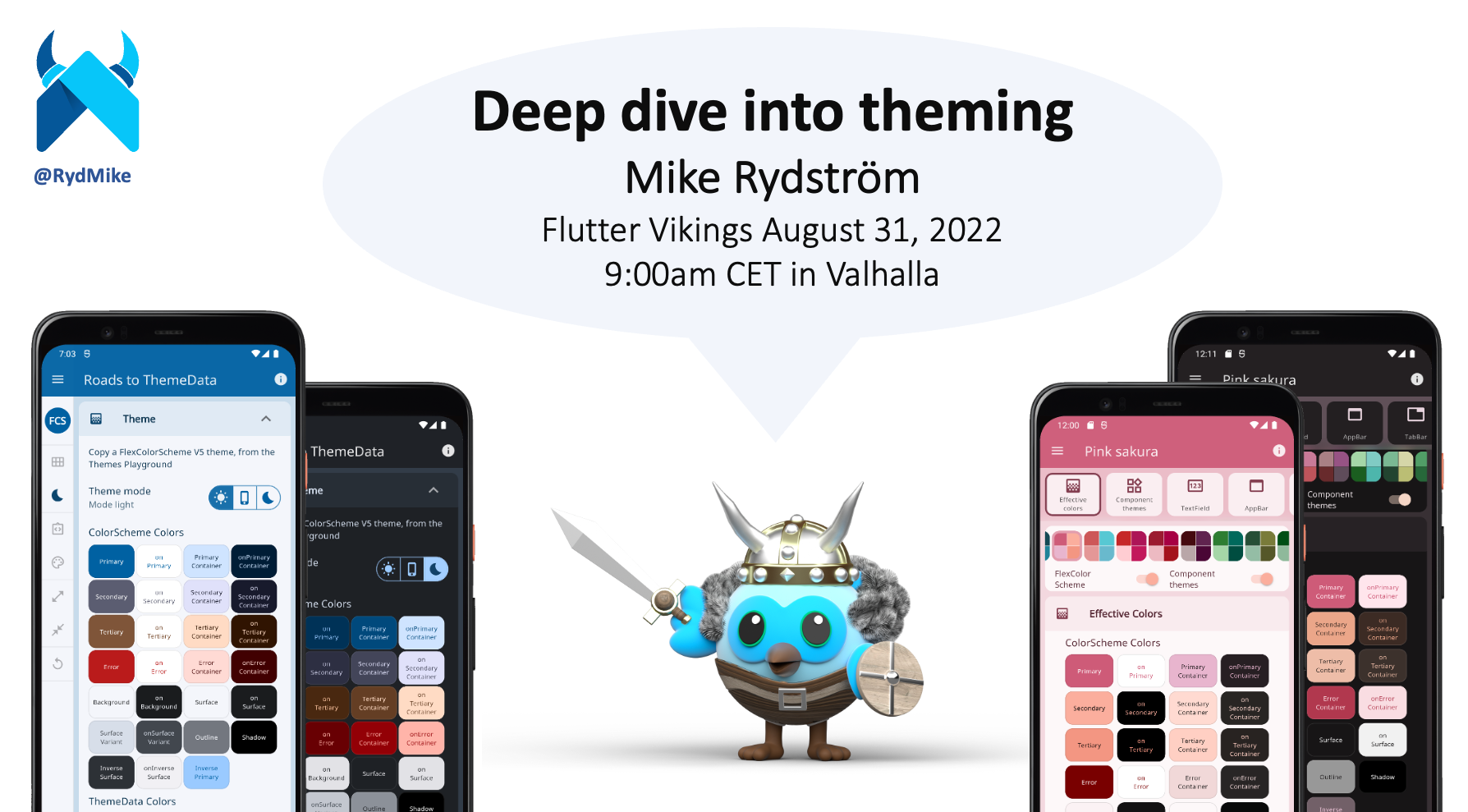 I could not keep the 4k videos used in original PowerPoint that I used during the talk. Google Slides refused to convert my 697 MB PowerPoint with 4k videos embedded in it, to Google Slides, more suitable for sharing on the web. So those videos had to be removed. I did replace a few shorter ones with GIFs that Google Slides could handle.

If you, for some reason, need or want the actual PowerPoint file used during the talk, you can download it here as well, but fair warning, it is 697MB in size!

Demo App Used in the Talk

During the talk and to prepare the slides, I used a simple app that demonstrates different ways to define a ThemeData object in Flutter, to show the different results they produce. The same app is also used to show what happens in Flutter 3.3 when you switch to using Material 3 themes, by setting useMaterial3 to true in ThemeData.

This demo app is available as a single Gist file on GitHub, and it can be run directly in a browser using DartPad here: 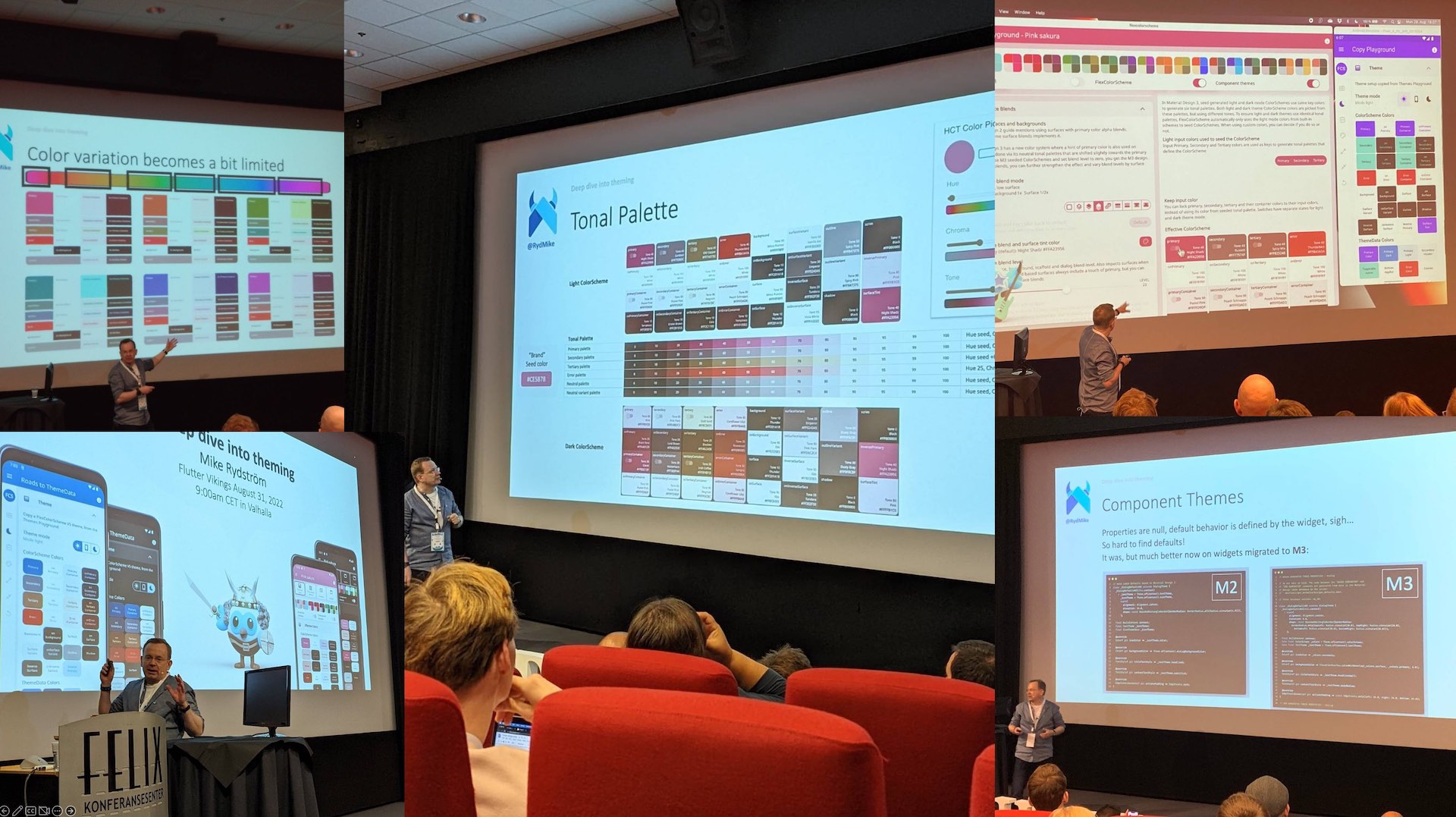 If you want to see more photos from the Flutter Vikings 2022, you can check the flickr album published from the event here.